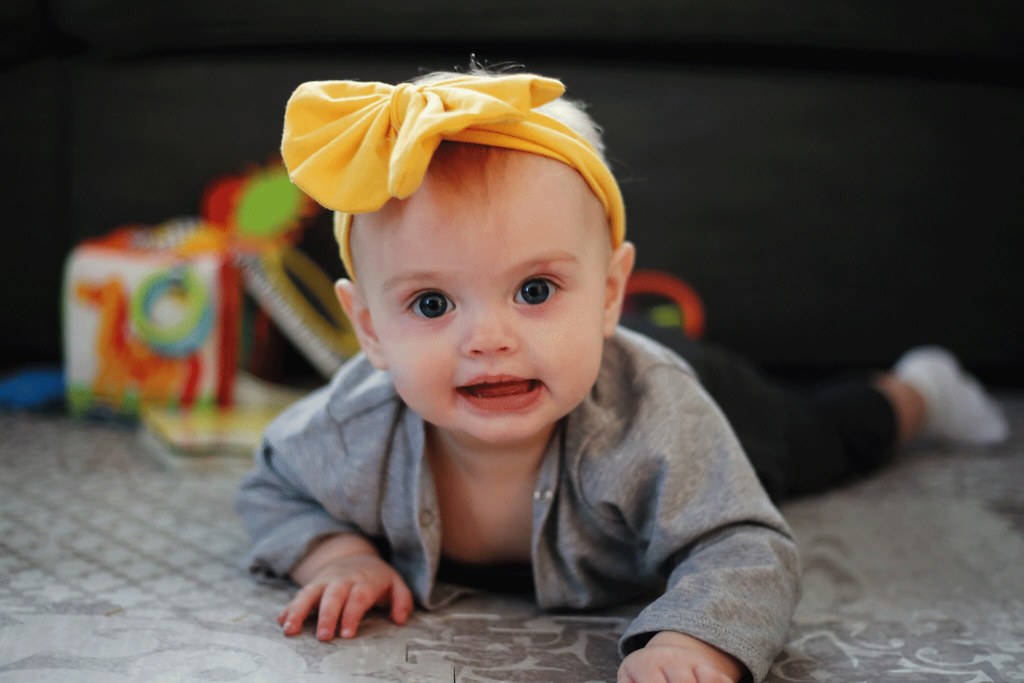 Seven is a pretty big number when we’re talking about how long Kaia has been Earthside. I can’t believe Alex and I have a baby so big, and I’m pretty sure I say that every month. This stage that we are in is so much fun. I feel like we learn something new about Kaia each day, and it’s a privilege to become more and more acquainted with her personality. She is most content when she is outside being worn or being strolled (because it combines her two favorite things: her parents and stimulation), and she works extremely hard for the things she wants. She is so inspiring, and watching her grow makes me want to try harder, to do more, and to be better.

I was just looking at pictures of her when she was a newborn, and it’s hard to believe that the person in those photos is the one sitting up in front of me, trying to crawl, eating food, drinking water, babbling laughing, playing, and discovering the world around her. Having a child has made the months (which were already passing so quickly) fly by at warp speed.

We are doing well. Most of month 6 was a lot like the previous month, and not much happened weren’t familiar with for most of it. We were confused and terrified for most of the month knowing that we had been in the middle of the really tough stuff (namely, not sleeping), but just as it started to seem like things were definitely not going to change, and just as every last book, friend, family member, and random person on the street made it explicitly clear that we somehow failed as parents by having a baby that nursed all night and would not sleep without being held — things changed. They changed a lot. Right before Kaia turned 7 months old, on a night where we  spent over two hours of attempting to nurse and rock and otherwise soothe her to sleep, we put her down in her crib so we could have a bit of a break, and she rolled over and slept for something like 6 hours straight before waking to nurse. On that night, pigs flew and snowmen were made in hell. Since then, Kaia has continued to sleep 5-9 hours before waking to nurse, and will often go back to sleep until 6-6:30 AM or even 7:30 AM some days. We have been much happier, I haven’t had any migraines, and we generally just feel like different people. My bedtime anxiety faded, so I was actually able to fall asleep faster, and Alex and I actually got time to spend alone together, which is something we really needed and missed.

While the sleep only started to improve less than 2 weeks ago, it was the catalyst for me, especially, to want to start to feel better in other areas. I was coming up on 1 year of constant pelvic pain when I decided that I needed to either do something about it or learn to live with it, or both. I stopped being active in the middle of my pregnancy when things got especially bad, and after pregnancy, gave up entirely on hiking, walking long distances, or doing anything physical that used to bring joy to my pre-pregnancy self. I called a physical therapist, but before ever setting foot into an office, I decided to see what my limits were. I started to walk 5-8 miles a day, and after the first few days, it was like I was a different person. I’m very happy to say that I am no longer in excruciating pain every time I take a step, and I am feeling far more like myself than I have in at least a year. I would definitely like to get back to my pre-pregnancy weight, and hopefully my ability to actually do things will help me with my goal. I’m so happy that things have gotten better around here, and truly, it has changed so many aspects of our lives. I’m always terrified that the other shoe will drop, but I’m very much enjoying the rest we’ve been given. Honestly, I’m so overjoyed that I could cry.

Kaia spent most of her 6th month of life learning so many new skills. She started babbling, started sitting up, and started to make her first attempts at crawling. Of those things, I think the babbling has been what has brought me more smiles than anything (I usually just stare in awe as she is sitting or trying to crawl) because it is just so funny. She practices her “b” sounds a lot, so she ends up saying babababa over and over until she eventually starts screaming it, which is hilarious. As she got closer to 7 months, she started sleeping without being held, and since then, she has been far less fussy during the day and generally seems a lot happier. We realized that our fear of not sleeping at all prevented us from allowing her the freedom to explore what works best for her, and it turns out, sleeping on her stomach is her preference — and that’s hard to accomplish when you’re always on your side, being held by your mom. Sleep, combined with the mastering of the new skills she worked so hard to develop means that she is doing better than ever.

We started solids a week or so after she turned 6 months old, and she was confused by all of the new flavors and textures she was exploring. We just recently started to give her actual pieces of food instead of purée on a spoon, and she seems to be enjoying herself more (but we’ll talk more about that next month). We also introduced her small amounts of water in a straw cup which has been going okay, though most of the time she doesn’t actually drink anything. Baby steps!

We haven’t weighed or measured her length in a while, but she is definitely over 15 lbs! 6-9 month clothing now fits her very well, with Carter’s pants and onesies fitting too loose in the waist but perfectly in length, while clothing from primary.com seems to be best for her. We have also found great fits in clothing from the Gap, OshKosh, and Gymboree, and we are just so thankful that we had so much clothing stored and ready for her to use when she started to outgrow all of her 3-6 month outfits. It’s always sad to put away clothes, but if there is another little one in our future (not tomorrow or anything — I’ve come to realize that talking about kid #2 when kid #1 is so young is taboo AF), we are definitely prepared.

A week or so after she reached 6 months, we moved Kaia into her own bedroom. She was outgrowing the weight limit in her bassinet so we had to have her sleep (or attempt to) in her crib, and she wasn’t really able to co-sleep successfully (putting her down, even in bed right next to me, was the opposite of what she wanted), so the timing felt right. Of course, because she only slept while being held, this didn’t actually change anything, but at least we felt like we were moving forward. Just before she turned 7 months old, she started sleeping independently, and it has been glorious. She’ll get 5-9 hour stretches before waking to nurse, and will usually wake up after another 3-5 hours before nursing again very early in the morning. She’ll stay down until 6:00 AM on most days, while we’ve seen a day or two where her wake time is 7:30. I think we’d feel less like screw ups if she could sleep  from 7 PM – 7 AM (with night waking, of course) but 11 hours and two wakings to nurse is nothing to scoff at, so I’m pretty cool with where we are for now. We know that we still have so many developmental milestones ahead of us that will likely mean disrupted sleep, but we feel confident that the worst is behind us.

Kaia is still mostly exclusively breastfed because we’ve only given her solids maybe 6 times. She nurses every 2-3 hours around the clock, though sometimes I sneak in an extra feed or three just to see if that’ll somehow help her sleep better (which, by the way, it doesn’t). I’ve been terrified to give her solids without Alex around for fear of her having an allergic reaction (I’m incredibly paranoid given that she’s already dairy and god-knows-what-else intolerant, and at an increased risk for a peanut allergy as it is), though I do much better when it comes to offering her water. I offer her a straw cup with 1 oz of liquid twice a day, and while she hasn’t really gotten the hang of it, she has reliably taken a few sips. It’s fun to watch her experimenting with solids and water, but breastmilk is still her number one source of nutrition and hydration, and will be for the foreseeable future.

I used to be so afraid of life with an older baby. I pictured chaos, not knowing what to do, feeling lost, and feeling overwhelmed a lot. I wasn’t sure I could handle it. My experience has been the opposite, and I feel like with every passing month life gets easier. Life with Kaia feels so natural. I can’t wait to see what the next month has in store for our girl and our family.

Lies I Tell Myself (the late January edition)

On not “bouncing back”