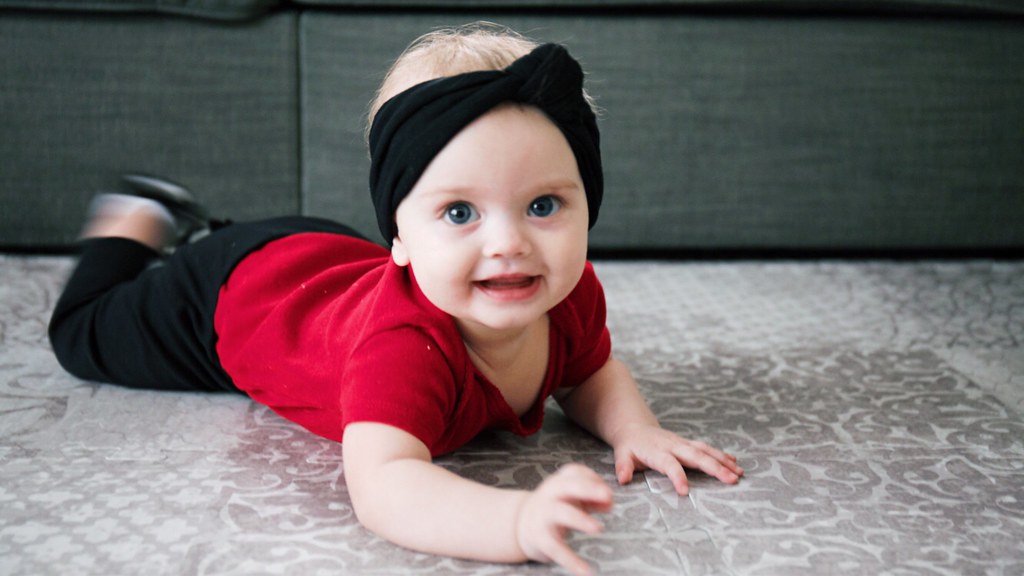 And just like that, we have a 6 month old. It’s exciting to have made it through 6 months of parenthood, breastfeeding, and life with a baby. Aside from meaning time is going by way too quickly, each new stage brings on a new set of anxieties. Four months was all about the sleep regression, five months old was all about getting out of the sleep regression (this never actually happened), and six months old is all about starting solid food. Yes, our baby who is barely coordinated will soon be eating actual food. THINGS WILL BE IN HER MOUTH, no big deal. I cannot believe that we are here, and that we all survived without any injuries or mental breakdowns. Parenthood thus far has been quite the learning experience, and truly the best thing that has ever happened Alex and me.

Alex and I have really gotten into the groove of this parenting thing. Kaia’s rough “routine” has really made everything easier on us, so most of what is going well for us has everything to do with her. She can usually stay awake for about 2 hours now before things really start to go downhill which makes doing “normal people” things like going out to eat, leaving the house even if Kaia has been awake for over 20 minutes, and driving longer distances less scary. We recently had lunch outside of the house for the first time since she was born (we reeeeeally don’t like to rock the boat, as you can tell). Kaia joyfully screeched the entire time, and an older man spent most of it glaring at me and covering his ears. I feel like we experienced some kind of parenting rite of passage as we ruined the ambiance of the Johnny Rockets (outside seating area) at the mall food court by bringing a little human. We finally joined the ranks of people who are hated on airplanes, in libraries, in restaurants, and basically in public wherever childless/childfree people are, and I was proud. I was proud to ignore guilt, to move past the fear of things not being completely perfect, the anxiety of not being able to control everything, and to get out there and just start living again.

While things are going well, I’m admittedly a little sad to have reached the 6 month milestone because no one in my family has met her yet. 6 months of life, and she still hasn’t met half of her family. Obviously, when you have a brand new baby who hasn’t had all of their vaccines, bringing them on a plane is really not a smart move.  After that, the whole cross-country flight, 3 hour time change, and baby sleep (or, really, not sleeping) thing made the idea of heading over to New York AND Florida seem really intimidating, and honestly, just incredibly annoying (especially now that there is baby gear to haul). A two or three hour flight wouldn’t be anything terrible, but this long cross-country trip can go wrong in so many hilarious ways. Is it possible to lose more sleep? I’m really not sure I want to find out as I sit in a hotel room on the East Coast! I’m sure we’ll get there one of these days, we just need to find a time that works for both of us and get brave enough to make the attempt.

Overwhelmingly, we are doing well. We seem to be in the sweet spot of having a little bit of a clue as to what we’re doing, but because Kaia isn’t mobile, and still loves nursing more than anything else in the world, things are still relatively calm in the Fort household.

Kaia is as happy, funny, and amusing as ever. She is starting to get her move on, and can always be found leaning over to grab whatever she is interested in, or spinning around on her floor tiles to find the toy she wants to play with. Pretty soon she is going to be crawling, which is crazy to think about. She is screeching a lot, laughing more and more, and is so active while nursing. Unless she is falling asleep, she nurses while holding onto her feet, kicking, grabbing my face/hands/shirt, and generally not being still. I hear this morphs into “gymnurstics” down the road, which I’m sure will be quite amusing. Recently she began to listen to stories and look at pictures in her books without being super distracted, and it seems like she is interested in what’s going on. It’s actually one of the sweetest things I have witnessed, and it makes me excited to think of all of the years we have together to read, go to the library, and learn new things.

Kaia’s symptoms associated with her dairy allergy disappeared (mostly), but then reappeared when I accidentally introduced some traces of dairy back into my diet. It can be a little complicated to keep up with a dairy free diet, I’m learning. Since then, I’ve been very strict and careful about not eating dairy, but things haven’t gotten any better which means eliminating soy is my next step. That is going to be even harder, but it’s worth the effort, and I’m hoping that this will help her return to “normal.”

Kaia is a string bean. She’s tall (not sure exactly how tall anymore because she is so wiggly when she is being measured), but only just over 14 lbs. She is growing and following the growth curve, but, admittedly, I’m a little insecure about her weight. Upon telling some people her weight, I’ve had responses that include “wow, she’s too tiny” and “she needs more food,” which is a bit frustrating and disheartening. Unlike moms with chubby babies, I can’t be the “valedictorian of breastfeeding,” or get told that I’m doing a good job. Instead, I face a lot of criticism, shaming, and “concern” for my baby. Healthy apparently equals chubby. I’m trying to remember that every human — even the baby humans — comes in different shapes and sizes, and it’s all okay. I’m doing anything wrong by having a tall, thin baby. Kaia’s growing and healthy, her doctor is not concerned, and that is really all that matters.

Shortly after last month’s update, Alex and I decided it wasn’t cool that I was losing so much sleep while he got decent enough rest. We started taking one hour shifts with Kaia so we all could get some sleep. Alex would rock her for one hour while I slept, and I’d hold/nurse her the next hour while Alex slept. On all but two occasions this month, she only slept while being held.

Lately, I have found myself holding her for 2-4 hours at a time in the middle of the night. She stays latched almost the whole time, and I’ve gone with the flow because it has given me a bit more rest. I’m not sleeping during this time, but I’m not fully awake either, so it saves me from having to wrestle with my insomnia in an attempt to fall asleep before Alex’s shift is up, and also helps Alex to sleep a longer stretch.

The lack of sleep we’ve been dealing with has really started to take a toll now. Alex and I both have frequent headaches, and I get a migraine 1-2 times a week which renders me a complete mess. Having so many migraines truly feels unsustainable. the pain, nausea, and sensitivity to light and sound makes it so hard to parent. Things are definitely getting harder around here on the sleep front, and we fear that there is no end in sight.

We’ve tried to help her to sleep independently, but to no avail. We’ve tried earlier and later bedtimes, longer and shorter wake times before bed, longer and shorter wake times between naps, and have established a bedtime routine. We have tried fleece, cotton, and terry pjs, lighter and heavier weight Zipadee-Zips, and different room temperatures. We’ve experimented with putting her down after holding her for 10 mins, 20 mins, 30 mins and 1 hr. We’ve used white noise and blackout curtains for many months, and started to sleep on the couch just in case our opening the door to go into our bedroom is what causes her to wake for the first time at night.

She seems to be having a problem connecting her sleep cycles, so it doesn’t seem like anything we’ve tried was going to help anyway, and we’re not sure there is anything we can actually do to help her. I think sleep is going to continue to be our biggest challenge going forward.

Kaia is still exclusively breastfed. She nurses every 1.5-3 hours, and has been doing a lot of snacking lately. She has also become more distracted while nursing, and pulls off the breast frequently to look around. If she does stay latched, she’s constantly grabbing my hands, face, and shirt, often while making sounds. Nursing is a lot less relaxed these days, but a lot more entertaining.

Now that Kaia is six months old, we do plan on starting solids soon (maybe this week). It took us a little while to finally decide on the high chair we wanted, and we’re still coming around to the idea of actually giving our baby solid food to eat. Neither of us is anxious to get started immediately, and I wish we could wait another month or so longer before making the leap! Kaia is not yet sitting unassisted, so we may delay introducing finger foods (starting baby-led weaning) until she can, and may delay it further if she is just not showing interest in picking up her food to explore. We will start with purées and see how she does. I’m so nervous!

Six months have absolutely flown by. It’s definitely bittersweet. Somehow, every month with her is better than the last. I do wish sometimes that time would slow down, but if it must continue to pass, I know that there is no other little girl in the world that I’d rather have by my side. Happy half birthday to our little bear. Kaia, you are so loved.

I’m still here, I just have a 3-month-old baby.