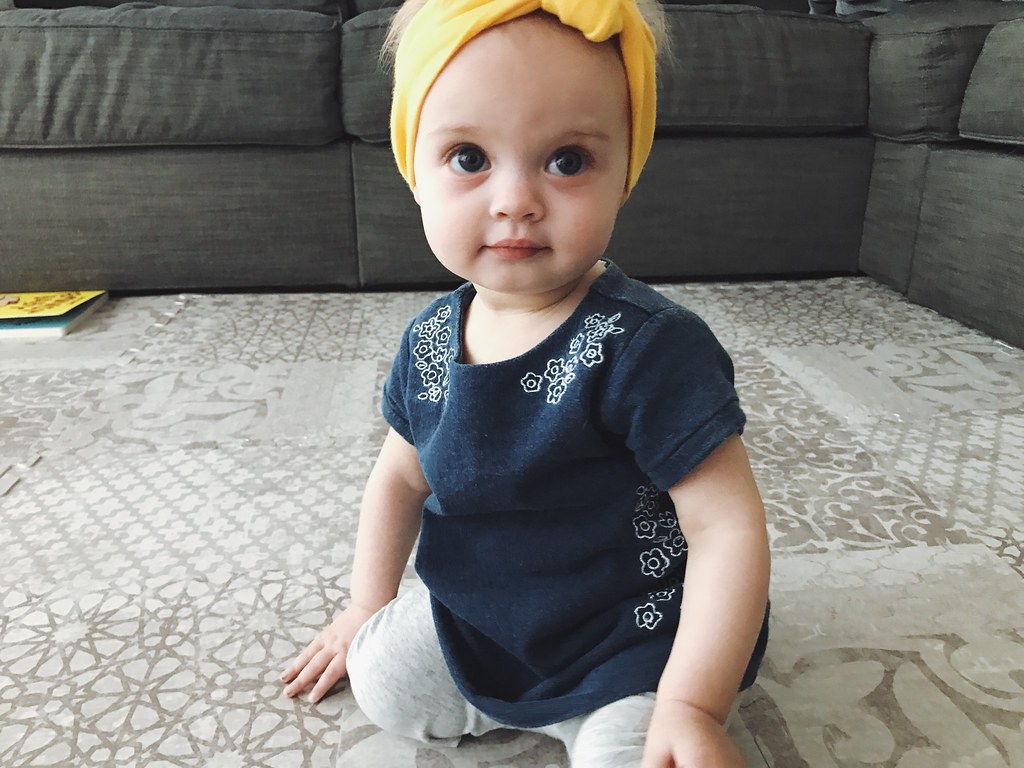 I don’t quite understand how Kaia managed to age 8 months in the 45 minutes she has been living outside of my uterus. Wasn’t she just in there kicking my ribs and having dance parties at 2 AM? I’ll never know why I blink and all of the sudden find that she is two pounds heavier and two inches taller. But I do know that instead of being kicked in the ribs, I’m being accidentally head butted by a nursing infant, and I’m definitely, mercifully, asleep at 2 AM (at least for now).

Things have gotten both more peaceful and more chaotic now that Kaia is 8 months old. She is on the move, standing with support, and seemingly always on a mission to find ways to injure herself, or scare and/or amaze her parents. Now that she is not interested in staying still for any amount of time, I’m always playing safety net and killing her joy by preventing her from diving off the couch, crawling off the bed, or rolling off of her changing pad. I’m thisclose to covering the floor in pillows, putting the mattress on the floor, and never using a changing pad again out of fear for her life — you know, just typical new mom stuff.

Kaia is so much fun to be around. She is funny, and determined, and happy. I get so much joy out of watching her interact with the world and the people around her. I’m so proud of her, and watching her develop new skills is  awe-inspiring. Her laugh is the most wonderful sound, and her smile lights my life. She has only been with us for 8 months, but I feel like I have known her forever. Motherhood just keeps getting better. Harder in some ways, easier in other ways, and better, always.

Things are going so well over here. We seem to be out of the terrible sleep trenches which has really made all the difference. Lately, parenting is really about finding balance between our needs and Kaia’s needs and less about sheer survival. I’m still not quite sure how to manage my time in such a way that I can make dinner, attempt to feed Kaia, and attempt to actually get in a few bites myself before we start the bedtime routine and put her to sleep. Alex and I have been eating after Kaia is in bed for the night (after 7 PM), and while this works pretty well for the sake of having a meal that isn’t interrupted by needing to entertain a baby, I’m starting to stress out about the idea of family dinners and trying to get her to eat what we are eating. The struggles we have these days are about practical, easy-to-solve matters that just seem like a much bigger deal than it probably is because we are so new at this. It’s a relief to have such superficial problems.

We’re finally starting to get into the groove of going places with Kaia without fear that we’re somehow going to destroy all of our lives. While we are still concerned about sticking to a general schedule, extending an awake time before nap because we’re not home or we absolutely need to do something at her usual nap time isn’t anything we stress over any more. Now that Kaia can sit up for long periods of time without wobbling or falling, we can go to restaurants and put her in those little highchairs (that used to give me so much anxiety), and little things like going out to eat really help us to feel like real people rather than just parents. We still have to work on actually sitting in the front of the car together while we are driving (one of us is always sitting in the back with Kaia just in case she starts to get really miserable) — but, ya know, baby steps.

Kaia is now crawling and standing supported! One evening she was scooting around on her knees, and the very next morning she was making a beeline for the dog. About a week later she grabbed onto the couch and pulled herself to a stand which I was so not expecting for at least another few weeks, and I was so impressed. Since then she has attempted to stand without using her hands to hold onto anything, though she definitely doesn’t have the balance to accomplish this quite yet. She never gets frustrated, though, and keeps standing right back up and trying again.

She has also started teething! Her two bottom teeth have erupted which hasn’t seemed to make her too miserable. She hasn’t had a fever, been drooling, had disrupted sleep, or been incredibly fussy, so all seems to be going well. It looks like her top teeth might emerge pretty soon, and we’re hoping that goes just as smoothly. However, the biting while nursing has officially commenced, and it’s both hilarious and horrifying. It hurts (obviously), but she is just so cute, I can’t be too upset over it. I feel like I get bitten the most when I’m mistaking her cues that tell me she is done nursing for distraction, but hopefully I’ll figure it out before any blood is shed!

Still not sure about a weight or a length these days, but we imagine she is close to 17 lbs. She’s looking pretty big these days! She is still in 6-9 month clothes, and some 6-12 depending on the brand. She has an appt with her doctor in a couple weeks, so we’re interested to see how long she is and how much she weighs these days. Until then, I think I’ll go ahead and keep denying that she’s no longer a little tiny baby.

Before teething came into the picture Kaia was getting 8-10 hours of sleep before waking to nurse. On one occasion she slept from 7pm-6am before nursing, and then went back down until 8am! Now that teething is a thing she has been getting 6-8 hours before waking to nurse, and will usually go back down until 6am or 6:30 (and sometimes 7, which is pretty cool). She is a pretty great sleeper in my book, and has come SO FAR in this department. I can’t believe there was a time where she didn’t sleep without being held. That’s just so crazy to me now that she rolls right over after being put down and is out like a light. I’m so thankful for the sleep, but Alex and I both say that we miss holding her as much as we used to!

Kaia has been eating more food, though is still getting the majority of her nutrition from breastmilk. We’re still doing mostly purees, and despite knowing infant CPR, I’m just not ready to give her finger foods without Alex around. She absolutely loves sweet potato, will tolerate applesauce if it has a little cinnamon in it, and seems to be a fan of blueberry. She loves avocado (and mashing the avocado everywhere), but is a little skeptical of banana. I’m looking forward to introducing mashed sweet potato to see what she thinks of the texture, and have been thinking about trying some other fruits like strawberries. Now that she is moving some of her finger individually, I’m curious to see what she would do if given some rice or ground beef on her tray.

Up until a week or so ago we were using a ZoliBOT straw cup for Kaia, though she only ever took a few sips, and very infrequently at that. The water was hard (even for Alex and me) to suck up through the straw, so I bought her a Tommee Tippee straw cup which she can actually drink from. She got about an oz on her first try which I was so impressed with, and I feel a little less like I’m completely failing in some area of motherhood that basically everyone else succeeds in.

I’m always trying to remember that this stage is experimental and about teaching and learning skills — not about eating and drinking like an adult or surviving on solid food and water. That helps to lower my anxiety about whether or not I am screwing her up for life a bit, though it’s hard sometimes. I do feel like I need to offer her more food and water (sometimes I skip a day or two depending on how interested she is, etc), but I’m really just trying to honor her needs and wants.

Life is getting interesting now that we’ve got an active, mobile baby on our hands. I can’t imagine what toddlerhood has in store for us, but for now, I’m just enjoying what little time I have left with this infant of ours. It’s hard to believe we’re close to double digits, and creeping ever closer to her first birthday. This month, especially, I’ve just wanted time to stand still.

A Guide to Seattle