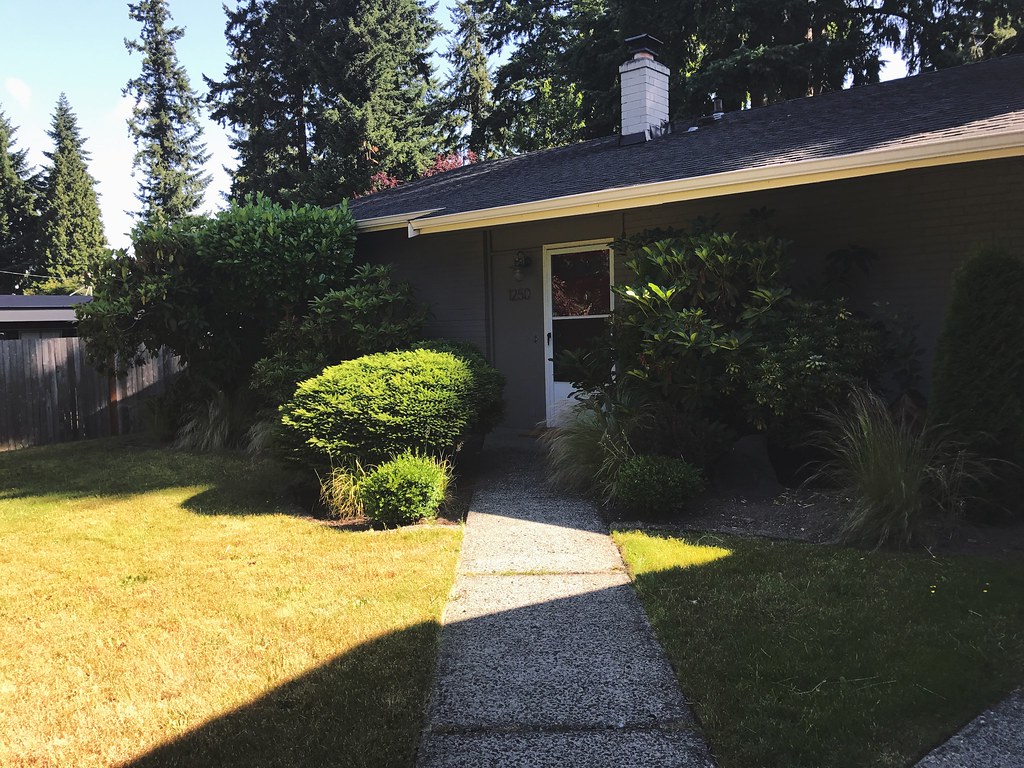 When we first moved to Washington, we lived in a shiny high rise on 1st Avenue, a short walk from Pike Place Market. I loved the view of the water from our balcony, the contagious roar of the Seahawks fans you could heard from the stadium during a football game, and the smell of salty air. It was something we never wanted to give up, and so for the next several years we lived in shiny high rises with water views, never more than a mile from our previous location, and for most of it, in apartments that were approximately the size of a matchbox. We were just so happy to live in the center of Seattle, and never questioned that the city was where we belonged.

We swore each time we flew into SeaTac airport that nothing could beat knowing that just over Lake Washington, and just south of Lake Union, all of our belongings sat in a tiny apartment in a glistening building riiiight over there. From the ground, the sight of the skyline was equally comforting, and for me, driving into the crowded city was like taking a Xanax during a panic attack. Whether we were returning from a hike, or backpacking, or camping, or a daytrip to Whidbey Island, or even an afternoon shopping in Tukwila — Seattle was comforting. It was predictable and familiar, it was home.

Being home meant watching the sunset over the Olympics, using flashlights to transmit messages via morse code to random people in hotel rooms at the Westin, walking to work, walking around on weekends wearing inappropriate shoes to find a tucked away restaurant with mediocre food and really good drinks, or venturing out on a quiet weekday with a friend just to grab breakfast at a french restaurant downtown, and somehow finding ourselves on a hike miles and miles from the city at 3 PM. It meant knowing that if you take the exit for the convention center and make a left at the first light, you can beat all of the traffic on the ever-popular exit ramp for Seneca and get to where you’re going a little faster. It meant knowing that It’s damn near impossible to make a right onto Union from 2nd Avenue without being rear-ended or side-swiped by a bus or two. It meant knowing that avenues run north to south, and streets run east to west, and never being lost. Sometimes I really miss it. Sometimes I feel like I am grieving the loss of home.

We moved out to the suburbs in mid-May, and nowadays you can find us sipping scotch in the yard, strolling with the baby down the street before bedtime, and doing very suburban things like not spending 5+ minutes driving out of a parking garage when taking the car anywhere, driving a quarter of a mile on a Friday evening in under 1.5 hours, and becoming acquainted with things like block parties, neighborhood watches, and backyard chickens.

Like many urbanites, our decision to move was prompted by welcoming a baby into our family. There is more space for her to play here, less noise (which is to say it’s totally quiet), and it’s less of a hassle to do basically everything but get to work and go to the doctor. It was a change we wanted, a change we chose, and yet when we packed up and drove the miles to our new place, the change was jarring. Being a Seattleite was the very last thing that tied me to my old life. It was always there as my secure base whenever navigating the new terrain that is parenthood and a dramatic shift in my identity became overwhelming. I changed a lot when I became a mother, but where I lived stayed the same, and familiarity was essential to me.

Just recently I sat in our yard on a waterproof blanket, in the shade of a tree, with Kaia who was tearing apart leaves. Even though I didn’t have my bearings, and was just beginning to come to terms with the loss of my connection to my pre-baby life, I felt it deep in my soul, the understanding that this place is definitely my home. It’s where this version of myself belongs. I don’t know how to get to a single place without the use of Google Maps, I’m asleep before the sun sets, I don’t know shortcuts to get to where I want to go, I’m pretty sure that shining a flash light into someone’s house would end with police at my doorstep, and I don’t even know if a French restaurant exists in this town — but this home means so much more to me than familiarity, flashlight communication, and a breakfast of Chausson aux Pommes.

Now, being home means being in the place where my daughter will take her first steps. It’s where she will one day call me mama, where she’ll giggle and play, where we will return after trips to feel at peace. It’s where I’m going to send her off for her first day of kindergarten, and maybe even her last day of high school. It’s where she crawls over to me as I put away laundry, it’s where I play Ella Jenkins on repeat and hug her tight under the midday sun, it’s where we read together, and eat together, and laugh together. It is to her what Fair Lawn, Bethesda, Athens, and Seattle were and are to me: the place that holds the memories of my past and the promise of the future. I point out flowers, and pretty houses, and schools, and kids riding their bikes, and I tell her that this is where she is going to grow up, that this place is her home. And I know it is one of many she will come to know over her lifetime.

I’m lucky to have had Seattle to call my home in my mid-late 20s, and I know that I am luckier to have Bellevue as my home in my 30s, which will arguably be one of the most important, significant, magical decades of my life. I’m going to make many happy memories here, just like I did in Seattle. One day, this, too, will be my old life. Someday, when I’m no longer sitting on waterproof blankets under a tree at 2 PM with a child crawling all over me, when I hear the very last bell ring on Kaia’s very last day of school, and when I’ll hug her for the last time in what could very well be years, I’m going to say goodbye to this. I’m going to lose my last connection to my childrearing years, and the word home will once again be redefined.

It is through that realization that I find I am not saying goodbye to the old me, but rather, hello, to the new one. I didn’t consider that to truly move forward, it often means letting go completely from the life you once knew to be fully prepared to grasp on to the life you will come to know.

The truth is that I miss the old versions me, I miss Seattle, I miss the many places I have called home. But I’m excited to have the opportunity to embrace the new me, to find new places that will become home, to find new places to miss. What I have been internalizing as an end is really just a new beginning. I think it was just so hard for me to see it that way when becoming a parent truly does mean making sacrifices, and “to sacrifice” means “to surrender.” Like many new parents, I was so focused on what I was surrendering and so terrified of it all that I often lost sight of what I was gaining. And it’s true that there are far better things ahead than any we leave behind.

I think I am finally ready to move ahead and to embrace my new beginning. There is no better place to start as I am right now, right here, somewhere I’m so glad I get to call home.

50 thoughts this new mom has on a daily basis

It’s better to be authentic than good